Skip to content
HomeUse an Alter-G for Your Running Rehab 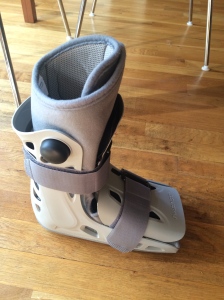 I’ve mentioned in an earlier post that I had an autologous blood injection in my left plantar fascia on October 27.  Fast forward four weeks and I just had the same procedure done on my right plantar fascia on November 24.  That meant back in the boot for a few days.

An Aside About Insurance

I got my insurance statement a few weeks ago after my first procedure.  The total cost of over $1,000 was covered completely by insurance.  The cost included lots of incidental costs, such as anesthesia, blood draws, etc.  I didn’t pay a cent for the procedure.  While I was thankful that insurance was helping fund my athletic endeavors, I was also irritated.  Why?  Because if I had the almost-identical (but more effective) PRP procedure done, insurance wouldn’t have covered any part of the procedure.

I chatted with my doctor about this disparity and I could tell right away that I hit a sore spot.  I knew that her clinic– which charges $900 to patients for PRP procedures– was actually discounting its costs for PRP.  A PRP procedure also requires her clinic to use a $300 one-time use tube for isolating the magical platelets from the blood.  Within the remaining $600, they have to recoup the costs of the procedure.  By contrast, when they do an autologous blood injection, they don’t have the $300 up-front cost and can bill over $1,000 to insurance.  She didn’t like it because PRP is much more effective.  In fact, her clinic is turning now towards using (much more invasive, time-consuming, and expensive) Tenex procedures, which costs $3-4,000 and has an effectiveness somewhat comparable to PRP, simply because insurance companies are willing to cover the (much higher) cost of Tenex instead PRP.

Simply put, competent doctors should be allowed to use PRP to treat patients and expect the same level of reimbursement as in other procedures.  It’s a disservice to patients and an enormous waste of physician time and money to not cover PRP in the same way that similar procedures are covered.  Okay, with that said, I’m stepping off by soapbox now and getting back to the post.

Rehab with an Alter-G

After my procedure, I chatted with my doctor about the recovery protocol.  Two weeks of wearing the boot.  By week two, I could start cycling.  By week four, I could start gentle running.  I then asked about running on an Alter-G and she looked at me and asked, “you have access to an Alter-G?  Well, then you can start running at three weeks.”  No real restrictions except pain level the next day.

I’m shocked by the lack of awareness around these magical treadmills and their easy availability in most urban areas.  I’ve had friends who have stubbornly waited out their doctor’s recommendations for various foot and leg injuries simply because they didn’t want to ask (who knows why?) about using an Alter-G treadmill as part of their rehabilitation protocol.  After all, this is what world-class runners and triathletes use regularly.  Heck, Paula Radcliffe had one of her sponsors buy her an Alter-G treadmill in her house and all of Alberto Salazar’s runners in the “Oregon Project” use them.

So what is this magical treadmill?  It’s a regular treadmill that is enclosed in an air-pressurized chamber.  By wearing a special pair of neoprene shorts that zip into air chamber (a bit like a kayak “skirt”), the air chamber lifts you up a little bit and reduces your impact as you run on the treadmill.  There are special pumps and gauges (to make sure that your perceived “gravity” remains constant) as well as special clamps (to make sure that you’re “skirt” is at a consistent height before being pressurized), thus making this treadmill quite a bit different from your run of the mill treadmill.   Not surprisingly, the Alter-G treadmill was developed by a NASA scientist interested in low-gravity simulations– but it’s application to sports medicine and injury rehabilitation was obvious.  A few years ago, an Alter-G treadmill would have set a clinic back over $70,000 but the newer, less expensive model (shown above) costs less than half that cost. This is a device that should be in every physical therapist’s office– and Alter-G makes this possible through clever financing plans.

At the same time, physical therapists are always looking for additional ways to pay off or capitalize on their investments in such a pricy piece of equipment.  Thus, physical therapists make their availability of Alter-G treadmills readily apparent– and Alter-G makes this easier by keeping a national database of PT’s who are willing to let you use one on a drop-in basis.  A few years back, I was traveling to Miami and had just had a PRP injection in my left achilles.  Rather than not run, I just went to www.alterg.com, typed my hotel’s zip code into “find an Alter-G” and I found a facility that I could safely run at.  Most PT’s charge about a dollar per minute if you drop in on an à la carte basis like this.  So a 30-minute run will set you back about $30.  Obviously, this isn’t feasible if you’re training for a marathon– and most PTs will give you a huge discount if you come in regularly.  This makes sense from their perspective– proportionally, they have to spend a lot more time with you if you are a drop-in.  Also, if you are regularly in rehab (like me during my off-season), it makes sense to buy a pair of Alter-G shorts of your own (they cost about $80)– and PT’s will give you even more of a cost break if you tell them that (because they don’t have to wash them).  If you do, PT’s are often willing to give you unlimited monthly programs for anywhere between $100 to $200 a month– easily within the range of most of us during the few weeks that we’ll need access to one of these treadmills.

How to Use an Alter-G Treadmill

The first time you use an Alter-G treadmill, you’ll notice how strong the “anti-gravity” effects are.  If you turn it all the way up, you can reach a maximum (or minimum, depending on how you look at it) of about 40% gravity.  This really feels like what astronauts must feel walking on the moon.  Each step becomes a slow-motion bound.  It’s amazing, however, how fast the body adjusts to lower gravities– with each percentage point return to 100% gravity, it feels like the world just got much heavier.

Most injury protocols I’ve seen start runners back at about 60-70% gravity, which still feels like a moonwalk.  I’d recommend starting here and using next-morning-pain to guide you on whether you ran too hard or fast the previous day.  It’s hard to maintain perfect running form at 60-70% gravity and just about impossible (at least for me) to maintain a high stride rate.  So, using pain as your guide, I would try to bump up the gravity slowly day-by-day to about 80-85% gravity.  Here, you can do some training that is very similar to regular running, but without nearly as much impact.  After about 90% gravity, I’d consider alternating Alter-G running with outdoor running (every other day, run on the Alter-G).  This will give your body a chance to take in the impact of regular running and recover on your Alter-G days.  After a week or so, you can probably start phasing out the Alter-G training– first by running every third day, every fourth day, etc.  Once you’re at once-a-week, you’re probably good for running outdoors full-time but if you have any setbacks, then it’s back to the Alter-G.

There are a few things to be aware of when running on an Alter-G.  First, the air inside the pressurized bubble gets quite warm so your legs and feet will get really hot.  This means that you may want to bring a change of socks and you may get blisters from having wet feet.  This also means that you should have a towel and water bottle ready.  Second, running on an Alter-G is boring, far more so than running on a regular treadmill.  Make sure to bring some entertainment.  Third, the shorts look utterly ridiculous.  Guys will lose some masculinity points because the shiny black “skirt” around the shorts has the effect of making you look like you’re wearing a strange slightly-alien, slightly-S&M tutu.  But if you’re serious about bouncing back from a running injury, an Alter-G treadmill is a miracle cure.  If you’re in rehab for an injury, do yourself a favor and find an Alter-G treadmill near you.