For the past five years, I have raced the Washington State Time Trial championships and my results each year follow an odd up-and-down pattern that usually reflects my level of dedication in preparing for the race.  This year was no exception as it was a down year.  Here’s what happened.

Each year, the Washington State time trial championship is held on the same flat-to-gently-rolling course in Tenino, Washington (about 90 minutes southeast of Seattle) and each year I dutifully drive down to the race.  Here’s a quick summary of my race results, including my average and normalized power.

In the world of cycling, I liken myself to a moderately-fast Prius instead of an ultra-fast Lambourgini.  I get my speed with efficiency and aerodynamics (interestingly, a Prius gets great highway mileage because of its incredible aerodynamics and not its hybrid engine).  Going near the hour mark on just a little over 200 watts is pretty darn efficient.  My physical talent isn’t cardiovascular fitness or muscle strength– it’s just the weird ability to curl myself into a very tiny ball and still pedal a bike.

So why was this a down year?  In short, this year was an example of poor planning, as I opened up my calendar two weeks ago and said, “oh crap, state TT’s are in two weeks!”  I was in the middle of a run build and had hardly been on my bike since Duathlon Nationals back in June.  I have also been a bit less-focused on competitions this year as my weekends were consumed for the first half of the year with other events in my life.  For instance, by the time I raced state TT’s this time last year, it was my 14th race of the year.  This year, it was only my fourth.

In the last two weeks, the lack of bike focus was becoming a bit more clear.  For instance, I use a long interval workout to gauge my fitness for this race– this year, I could only hold about 210 watts during the workout whereas I usually hold about 230-240 watts.  So I really wasn’t expecting much as I rolled up to the start line and my finishing time of 1:01:27 (24.26 mph) was actually better than I expected to do.

Right off the start line, I played it very safe.  I kept an extremely tight position on my bike and held my watts strictly in check.  Using my results from the interval workout, I decided to stick to 210 watts.  Nevertheless, I was flying down the road.  So I was surprised when a guy blew by me five minutes into race (he was the only one who passed me until the last kilometer, when two guys— who I saw drafting each other at the turnaround— passed me right before the finish line).  The course was pancake flat, with wide sweeping open turns.  I kept tweaking my aerodynamics as I zipped down the road— flattening my helmet tail against my back, dropping my pelvis to flatten my back, and keeping my head as low as possible.  As we approached the turnaround, the course started to roll a little bit and I took advantage of some of the uphills to sit up and stretch out my back.

Approaching the turnaround, I spotted the guy who passed me five minutes into the race— apparently, he wasn’t able to keep up his speedy tempo and was blowing up.  If it was last year, I would have likely caught him but not this year.

The second half of the race was considerably worse than the first half as my form started to fall apart.  My back was really sore and I sat up a few times to stretch it out before dropping back into my tuck.  Also, my legs were feeling the lack of hard cycling miles and were just starting to go flat.  The finish couldn’t come fast enough as my average watts were starting to drop.  I hit the lap button just as I crossed the line at 1:01:27.  I was disappointed to not go under an hour, but that would have been crazy ambitious given how low my watts have been lately.  Given my wattage, my time was dead-on where it should have been. 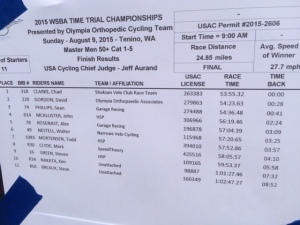 But the strange part of the race didn’t happen until after the race.  First, came the results.  In past years, I raced in the category 4-5 (no age category) and a time of around an hour usually lands me right in the middle of the pack.  This year, I raced Masters 50+ and came in second to last place (out of 11 racers).  “What kind of crazy field am I racing against,” I thought, “when riding 24.26 mph for an hour gives a second-to-last-place finish?!?!”  Even if I had run a spectacular race and finished around 58 minutes, I still would have only moved up one position.  Jeez, these old guys are fast— I need to race with the slower young guys!  I later found out my disappointing placement was because the race directors collapsed the 50+ mens category into one single category 1-5 group!  Next year, I won’t make that mistake again!

My second surprise was more pleasant, however, as I had hardly any muscle soreness apart from a tight set up hip flexors immediately after the race— plus I wasn’t really tired at all.  Apparently, there was a lot more engine to match my aerodynamics— I just have no idea why I couldn’t tap into it.  Hopefully, I’ll be able to figure that part out before Worlds in Adelaide in October!  And, no, that race won’t go unnoticed in my calendar!