Skip to content
HomeImprove Your Training and Your Life: Get a LVL Now 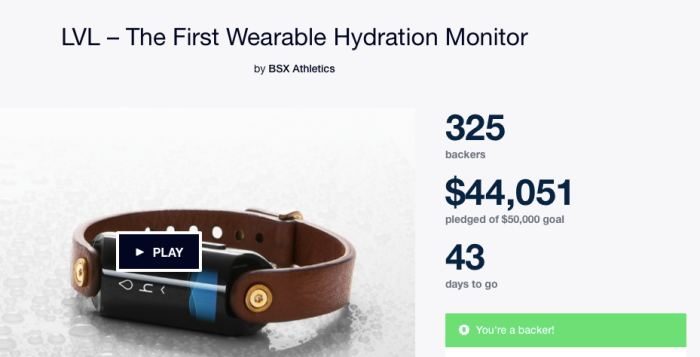 The guys at BSX just launched their new Kickstarter campaign for their new hydration monitor.  I woke up really early and was the fifth person to contribute to their campaign.  Here’s a quick overview of what I know, why I’m a fan, and why you should sign up for one now.

Let me say up front: when I’m not working out, I’m not a wearable fan.  I don’t wear a FitBit, Vivosmart, or any other fitness tracker.  I don’t count my steps or watch my heart rate.  Frankly, I don’t see the point, especially when I have a TON of data just from my workouts to parse through and analyze.  But when I heard about the LVL hydration monitor, that was a no-brainer.  I was just going to have to find room on my puny wrist to accommodate something in addition to my workout watch and my RoadID.

ad over the LVL Kickstarter Page, you can watch a quick video that describes this cool new product that BSX hopes to get out to you by March 2017– just in time to guide your warm weather training for 2017 (if you live in the northern hemisphere).  The idea of a device that tells me in realtime exactly how much water I have to drink to stay hydrated is VERY cool.  And because I’m normally an idiot when it comes to hydration, this one could actually improve my life– or even save it.  Watching the different videos on the page, it’s amazing how many different facets of our everyday life are affected by hydration.  Obviously, hydration can affect your performance in a race or workout.  But I didn’t know that dehydration could cause huge medical problems like a stroke (which happened to Dustin Freckleton, MD, one of BSX’s founders). It can even affect your campaign if you’re running for President.  I also didn’t know that hydration isn’t the sort of thing that can be magically “fixed” right before a big workout– Matt Fitzgerald explains in the video on the Kickstarter page that optimal hydration throughout the day is really what’s needed to optimize hydration.  Again, being told not only that I have to drink, but exactly how much I have to drink, in realtime is a killer feature.

But for those of you who are into wearables, the LVL apparently tracks the usual information as well.  In addition to tracking hydration, the LVL will also track:

In fact, it probably tracks these metrics a lot more accurately than your current device.  Chances are that, if you have a fitness tracker that records heart rate, it’s using green light, which is definitely inferior technology when it comes to analyzing stuff going on under the skin.

The LVL doesn’t come out until March 2017.  In the meantime, you have a chance to pre-order one by backing their Kickstarter campaign and they have a chance to further refine their product.  If there is one feature that I would like to see them implement, it’s making a band for the LVL that is compatible with the RoadID identification systems.  As I’ve mentioned, space is at a premium on my wrists and combining two devices into one would be awesome.