Skip to content
HomeA Real Pain in the Butt: Hamstring Tendinitis, GHR Raises, and Free Speed on the Bike

2014 has not been a good year for hamstring tendons.  So far, I’ve counted three friends (all within a few months of my age) who have gotten bitten by upper hamstring tendinitis.  Mind you, I’m an old guy– I don’t have that many friends.  When three of them suddenly get hamstring tendon problems, I call that an epidemic.  Fortunately or unfortunately, I know something about this injury — I got hit by it hard about 5-6 years ago, figured it out, and fixed it.  I’ve also figured out some ways to turn a disadvantage into a way to get faster.  Although I may regret it when former victims of this problem start beating me in races, sharing my thoughts on it is probably for the greater good.

What Is It and Why Does it Happen

Hamstring tendinitis is damage, pain and swelling of the hamstring tendons.  The term “tendinitis” is actually a misnomer in most cases– it starts as tendinitis (pain and inflammation) but after about two weeks left improperly treated, it becomes tendinosis (pain and degeneration of tissue).  As we age, our bodies dramatically reduce blood supply to our tendons and ligaments– with the result that injuries to those tendons and ligaments heal super slowly under the best of conditions or heal poorly with lots of leftover damage under more typical conditions.

So why the hamstrings? The common thinking is that this injury happens during the swing phase of running– as your airborne leg is rapidly moving forward for your next stride, it suddenly has to slow down and reverse directions so it can propel you forward when it hits the ground.  That reversal of direction is a classic eccentric contraction— the hamstring is both (resisting) lengthening and tightening at the same time.  This strain occurs mostly at the hip– and you can feel the pain right under your sit bones.  But, if you think about the running stride, most runners are also unfolding their knee joints during the end of the flight stage of the running stride– consequently, it’s also not uncommon to get hamstring tendinitis at the back medial and lateral hamstring tendons behind the knee.

How Can I Tell If I Have Hamstring Tendinitis?

What Can I Do Now That I’ve Got It?

First things first.  If you fail either of the tests outlined above, get yourself in to see a doctor as soon as possible.  Don’t just sit around and wait for this one to go away.  I’ve seem plenty of people lose an entire season if they don’t get on top of this one as soon as possible.  This is particularly true if it bit you during the off-season– you want to cure this as much as possible before your season really heats up.

First off, let me just say that I don’t believe that any of these conservative treatments resolves these problems either quickly or permanently enough to my satisfaction on their own– they need to be used with more aggressive protocols (below).  Alone, they may be fine for a typical weekend warrior– but not enough for a dedicated lifelong athlete.  These treatments typically involve basic strength training exercises.  Both the Runner’s Connect site and the Running Times site have decent information with fairly standard protocols.  I’ll let you go check them out them instead of inundating you with information available elsewhere.

In my opinion, the problem with conservative treatments for hamstring tendinitis is that they don’t resolve the underlying issue– lack of blood flow to the hamstring tendon.  In addition, they don’t adequately prepare the body for the specific types of insults it needs to endure in running (notably, eccentric contractions).  This section addresses how you can do a better job at fixing and strengthening your hamstrings.

First, let’s tackle the blood flow issue.  Increasing blood flow involves more than hot packs and ultrasound.  In fact, neither one of these strategies (so commonly used by physical therapists) have been shown to provide anything more than palliative care.  Let’s talk instead about strategies that I think really work.  Sadly, none of these procedures are covered by insurance.

Okay, we’ve got the blood flow issue solved as best we can.  Next step is to address the strength issue.  As noted above, the current thinking is that hamstring tendinitis is the result of eccentric contractions.  So it makes sense that our exercises should also address the eccentric component.  Another reason to focus on eccentric movements is because all of the research over the last ten years has been suggesting that the so-called Alfredson Protocol is the most effective exercise you can do for tendinitis (just google “Alfredson Protocol” to see what I mean).  The problem is that this requires some very strenuous eccentric movements– not something you should dive into immediately unless your pain has cooled down a bit.  Once it does, however, you should be dabbling with this kind of exercise.

Building Your Own GHR Apparatus

The first time I read about eccentric hamstring exercises was flipping through the October 2003 copy of Running Research News.  In an article titled, Swedish Cured Ham is Right Recipe for Rejuvenated Running (a text-only version is available at Runner’s Web), Owen Anderson talks about an exercise he calls “kneeling hamstrings” but cross-fit fanatics would recognize this exercise as a glute hamstring raise (GHR).  These are incredibly difficult exercises– I have yet to be able to even one properly without a GHR machine even though they look simple.  Here is a great video demonstrating how they are done.

A much more humane (yet equally effective) version of the GHR is to use a rounded cushion under your thighs.  This changes the leverage point, making the exercise a lot easier to do.  Here is a video demonstrating how these cushions work.  Incidentally, the athlete’s form while doing this exercise stinks– the body shouldn’t hinge at the hips but should be a nice straight line without any arching at the back (just like when you’re running).

Apart from the high price tag associated with this cushion (about $400-$500), I didn’t like how it doesn’t adjust.  As I got stronger, I would want to lower the cushion–ultimately even eliminate the cushion altogether.  This would also mean that my feet would have to be tied down and that I couldn’t rely on just my feet pressing up against a wall or a box.  So what’s an old cheapskate like me to do?  Build his own, of course!

The construction took the good part of an afternoon but the design took quite a bit longer than that.  First, let’s talk about the components. 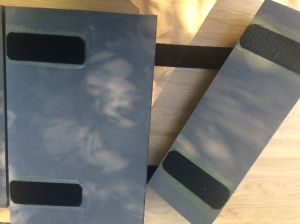 clearly visible in the finished product are the velcro strips attached under each panel.  This is what gives my GHR contraption the height adjustability lacking in the commercial models.  Under the two wider pieces of foam, I glued two 11″ tracks of sticky velcro on the bottom side and matching 11″ tracks of fuzzy velcro on the top side.  As shown in the piece on the left, one of those fuzzy velcro strips can be shorter on the top-most 12″ wide piece of foam.  Also note that adhesive velcro doesn’t stick very well at all directly to closed-cell foam.  The solution is to first prime the areas where the velcro will be placed with some heavy-duty contact cement.  This actually goes for all areas where adhesive velcro will be used, including the base plywood panel.

The total cost of this project was less than $80.  It is both far more useful than the commercial GHR cushion– and a heck of a lot cheaper.  It may not have the professional look of truly commercial, gym-based solutions, but those devices are enormous and impractical.

Having described my GHR and its benefits to hamstring tendinitis, let me warn you right now: you don’t want to dive into GHR exercises too quickly.  These exercises are insanely hard.  Really.  Even if you don’t feel it immediately, you will feel it a day or two after you do them.  Eccentric exercises are notorious for creating delayed onset muscle soreness (DOMS)– and this exercise can leave you sore for a week if you do too many at once.  I would recommend that you start with one rep to start and call it a day.  Only if you’re fine the day after should you progress to more repetitions– and, even if you become truly proficient at this exercises, you should limit your routine to six repetitions at most.

As fantastic as the GHR exercise is for developing eccentric strength in your hamstrings, it does have some limitations.  Most notably for those with the ischial tuberosity (aka “pain in the butt”) version of this tendinitis, GHR’s shouldn’t involve eccentric motions at the hip because all of the movement takes place at the knee.  Unfortunately, I don’t know of an exercise that has such a strenuous eccentric component for that end of the hamstring.  On the other hand, this might actually be all for the best because such an exercise would likely cause too many cases of lower back strains.  To get around these limitations, I think a short round (10-12 repetitions at most) of single-leg deadlifts is just what is needed.

Matt Fitzgerald does a great job at describing how this movement is done in an exercise that he calls the “split stance dumbbell deadlift”.  Don’t worry, however– it’s exactly the same exercise.  I like to do these with a fairly hefty kettlebell or dumbbell (35-45 pounds).  Be sure to keep the back in a neutral position throughout the exercise and really think about the glutes firing hard on the way up.  As you go down with a neutral back, you should feel your good ole ischial tuberosity friend reminding you that he is still there.  Over time, that pain should morph into what non-injured people feel– an overall tightness in the hamstrings.  That tightness is actually a good thing as it reminds you that you are doing the exercise correctly– if you didn’t feel it, that would likely mean you are curving your back and risking injury.

Free Speed and No Speed

When the first of my friends with hamstring tendonitis told me about his condition earlier this year, I started doing GHR’s and single-leg deadlifts immediately.  My thinking was that working these exercises would help prevent my condition from years ago from recurring.  Now, I try to fold them into my routine, particularly during the first few weeks of a cycling build.

Why build them into a cycling build, if they help prevent running injuries?  If you’re like me, you may notice that GHR’s have a immediate effect on increasing your watts on the bike.  I find this particularly evident if I emphasize the “coming over the top” and “scraping the foot” portions of the pedal stroke.  I’m not exactly sure what the dynamics are but I suspect it has something to do with how this exercise tends to activate my (lazy) posterior muscles.  This increase in wattage isn’t insignificant.  On some efforts shorter than an hour, my watts were up 10%!  I could put down the hammer just a lot easier.

Unfortunately, as significant as the benefits of GHR’s are to my cycling, they have a much greater deleterious effect on my running.  In a nutshell, they make my running suck.  My legs are super sore when I run and I have zero pop in them.  You definitely want to stop doing these exercises in the week leading up to any kind of serious running race.

So there you have it– my thoughts on hamstring tendinitis, treatments, and some mysterious free speed that came about by experimenting with different solutions.