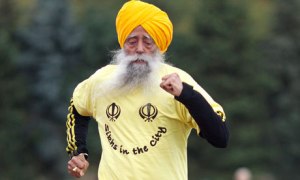 Who doesn’t love Fauja Singh?  Any guy who can run a marathon at 100 years old is pretty impressive.  But this post is about folks a little younger (in their 60’s and 70’s) who run a whole lot faster.  Think sub-3:00 marathons at 70 years old.  For the past several months, Canute’s Efficient Running Site has been running a series of posts on how exceptional older runners stay in shape and train.  It is definitely a fantastic read.  Here’s a quick recap of what I learned– plus my take on how to be a great older runner.  While I can’t give you any advice for living long enough to even be in Fauja’s age group, I can tell you how to train to beat him.

First off, let my give credit where it is due.  Canute’s site does a much better job than I can do of carefully analyzing each runner’s background, incredible performance, and likely factors that led to each runner’s success.  This is set forth in a number of fantastic posts.  If you take value in this Reader’s Digest version, do yourself a favor and check out the original sources.  These are:

So who were these runners that Canute examined?  Be prepared for some pretty remarkable older athletes– even in their 70’s most of the could smoke me.

Putting it all together.