Skip to content
HomeRacing Smarter with a Power Meter 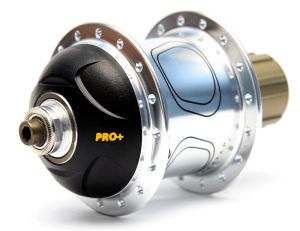 Part of being faster when you’re older involves being smarter when you’re older.  Of all the sports in triathlon, the one that has benefitted the most from technology is cycling– and no piece of modern cycling equipment (except possibly aerobars) makes as much of a difference as a power meter.  Here’s why you’re just giving up a podium spot if you don’t own one and use it effectively in your training and racing.

I’m really hoping that this post is just preaching to the choir.  I’m hoping that you’ll read this post with a big yawn and say, “yeah, yeah, thanks, but I know all this already.”  But when I see too many talented duathletes and triathletes in transition without power meters, I just feel sorry for them.  Even at the National and World Championships, most of the bikes don’t have power meters– which suggests that maybe the choir isn’t that big.

It’s All About Your Average Watts and Good Pacing

Of course, in any race, the fastest person wins.  And in any race where drafting isn’t legal, this all comes down to average watts.  If you pedal harder or faster, you’re likely going to win.  But it’s also slightly more than that– it’s about highest average watts expended in the most even way possible.  For instance, a guy who blows up charging into a head wind is going to lose to a smarter guy who keeps the same average power but paces it out dead evenly across the duration of the race.  If you want to see what I mean, you can read my State TT Championship race report from last weekend– the guy who blew by me in the opening 10 minutes but ended up over 2 minutes back at the finish line probably had higher average watts but his pacing was miserable.  You can watch the video clip to see just how much uneven pacing sucked the life out of him.

How Do You Use a Power Meter to Achieve Awesome Watts and Even Pacing? 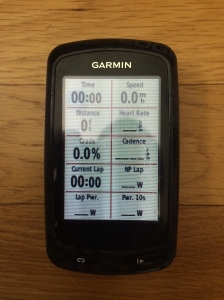 Every modern power meter provides a stream of power information to your cycling computer.  You want to make sure that your cycling computer can compute and display three key metrics, which I’ll describe next.  On my Garmin 810 (shown on the left) these three data points are on the bottom right– closest to my eyeballs when I’m in my aero position. Get very comfortable with these data points and you’ll do great in your next race:

How do you figure out what your numbers should be?  I think that the best way is from either a past recent race or from doing a hard workout that is about half the duration of your race event (I can usually hold my watts in a race for double the distance I can hold it in a workout).  By looking over your power file for either of these workouts, you can easily figure out what your average watts were for that workout.   This gives you a rough number.  Then you have to decide if that number is realistic for your next race by asking yourself a few questions such as:

In a duathlon or triathlon, once you’ve got your number, that’s it.  Then, you want to to gear all of the three metrics above (average watts, normalized power, and current watts) around that number.  You want to have tunnel vision– everything should come out to be that number in your race.  Remember, you want dead even pacing.  In a time trial, however, where you’re dumping the tank at the end of the race, I like to set a slightly lower number for the first half and a slightly higher number for the second half.  Yes, dead even pacing is all well and good but people still achieve better results in all-out events with negative splits.

The second exception to dead even pacing are hills (particularly steep hills).  For these, your average watts might have you moving backwards (or so it may seem in a race).  Here you want a second number which is only about 20-40 watts higher than your goal number– and you have to tell yourself, “okay, I’m allowed to use this higher number only for 30 seconds (or some other short period) and no longer.”  This is like your afterburners– you can flip it on only for a short little burst before immediately returning to your goal power.

If you’re racing a duathlon or triathlon, that’s about all you need to know– you can’t really make adjustments because you still have to run afterwards.  In a time trial or other event where it’s all about the bike, however, you can make some minor adjustments.  In addition to setting different first half / second half power averages, you can also just use experience to adjust those averages.  That’s what I did at my recent 40-K with great results.  Also in a time trial, you can “dump the tank” as you draw near the finish line.  If you find yourself with a little extra gas in the tank, just use that information to raise your averages for the next race.  Just please don’t get down on yourself for not “giving it all you got”– it’s always better to finish a race with a bit of extra gas than running out of gas out on the course.

Ignore the Coaching Nonsense About Learning to Pace Internally

A lot of coaches will tell you that it’s important to build an internal barometer of how you feel and to use that to gauge your racing efforts instead of relying on a power meter.

Unless you race professionally or race every weekend, there’s simply no way that you can replicate the excitement and adrenalin levels of race day in your training.  Also, without exception, everyone feels better and fresher at the beginning of a race than at the end.  So a coach who relies on perceived effort in a bike race is really saying is that their athletes need to learn patience and figure out for themselves when their perceived exertion matches their actual exertion.  A very laudable goal for an athlete willing to risk a couple of seasons and a bunch of their “A” races trying to figure this out.  Alternatively, they could just use a power meter and do a far better job of it from the outset.

Some coaches also say that a power meter sets lower performance expectations for their athletes because they just set a number that’s too easy.  To me, that’s just an admission that the training they assigned was wrong to begin with– likely that the athletes were fried before their taper, couldn’t set great benchmarks, and so their race day performance was naturally much better.  This result isn’t surprising given how most coaches overtrain their athletes.  Athletes who have this experience might consider how much deeper they could have dug and how much faster they could have performed (in their training and consequently in their racing) with a little more recovery in their training routines.

There are some times, however, when it is better to just ditch the power meter and go for it.  A long uphill finish might be one example.  Another example is younger athletes who can dig themselves into a really deep hole in their races.  You can usually spot them after a race, either throwing up on the side of the road or unresponsive and curled into a fetal position.  But if you’re reading this page, you’re likely older, wiser, and know well enough that you shouldn’t things like that to yourself.