A few days back, I had an amazing ride on my favorite course in Carnation, Washington.  It’s a 12-mile loop that takes me just under 30 minutes to complete– but time isn’t the important number to me.  It’s all about watts.  I repeat it twice (2 x 30min). Even though I was tired going into the ride, I blew away my PRs.  Here’s what happened, why I think it happened, and how you might be able to use some of this training goodness for your aging body.

I got down to Carnation in the mid-afternoon on a picture perfect day.  Autumn creeps in gradually here in the Pacific Northwest.  The sun hangs just slightly lower in the sky.  Being a sun worshipper but growing up in the northeast and mid-atlantic region made me particularly sensitive to the approach of autumn. 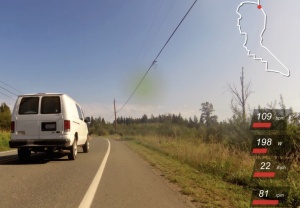 My workout started out pretty poorly.  My legs were still feeling a bit tired from having run a lactate clearing blend workout only two days before.  I was also thinking to myself how much fresher I felt just two weeks earlier when I hit this course hard before State TT’s— and how much flatter today would likely be.  On that amazing day, I hit 232 watts on this course and felt like I was on top of the world.  Mind you, I’m a puny guy in the power department with a functional threshold power (FTP) of only 226 watts.  My power plateaued years ago– and has been stuck at the same point for the last five years.  No matter how many hard 20-minute FTP intervals I ride or how many long 3+ hour tempo efforts at 91+% FTP I go on, my FTP does not move (earlier this summer, I discovered how to fold low-cadence supra-FTP work in to this mix, but I haven’t been able to work on that lately as it isn’t very race-specific).  Today, after 3 minutes of riding hard, I looked at my power meter and noticed I was below 210 watts.  I then thought about how I felt (like crap) and was about to throw in the towel.

But something told me to try one more time…

For some reason, I just hit this one hard from the start and I used my power meter to motivate me.  One mile into the ride, my average was about 240 watts and i just told myself not to let any of those watts escape.  This would be suicide, I thought, as I’ve never been able to hold that kind of power for this effort. Sure enough, the numbers started coming down… 235…. 230…. By the time I rounded the turn into Falls City, my watts were down to about 226 on average– and I still had the tougher half to come.

On the second half, I just hit it hard, focusing on a good clean pedal stroke and keeping a tight aero position (not that speed was the object).  Now I was digging hard– really hard.  On these long efforts, I usually don’t find myself “sucking wind”– breathing in and out so hard that my throat gets sore.  Today, I was.  Something told me that I had to dig harder today.  I was all alone, except for the occasional farmer driving a pickup truck.  Gradually, the watts started coming back up.  When my average watts hit 230, I got excited because I could match the 232 watts I put down before so I kept going.  At 235 watts, I could feel myself start to fade but I was at a point very close to the end.  I could “smell the barn” as one of my old coaches used to say.  236 watts!  Yay, a new PR!

I took a nice long 6-minute break between my efforts.  The second effort, I told myself, wouldn’t be anything to write home about.  I was tired from the first effort and I’ve never done well after heroic first intervals.  I got up to the start line and thought, “well maybe I can just use 236 watts as my goal and we’ll see how long I can hold it.”  And an instant later came the second thought, “yeah right, like that’s gonna happen.”  I rode the first part of the ride down to Carnation feeling– strangely– remarkably good and able to hold 237 watts… but the hard part was still coming up.

Rolling out of Falls City and into the farmland, I just threw caution to the wind.  “No way is this going to last,” I thought, but it just did.  In the past, I would have blown up back here but it didn’t happen.  This time, I was hurting but I could continue to hurt. I was probably a pretty pathetic sight.  I was now breathing really, really hard.  I remember reading stories about how runners hated to run with the legendary Czech runner Emil Zatopek.  He had an ungainly running form and breathed like an overworked draft horse.  Running with him just made you tired.  I was Zatopek on wheels.

Midway through the back half, my watts were at 240.  With only about 7 minutes left, I had a strange feeling of disbelief and euphoria.  I knew that I would break 240 watts but how was this happening?  I dug deeper and deeper, comforted by knowing that this was my last interval.  Crossed the line at 243 watts!

Putting the Pieces Together– How Did I Do It?

I’ve blogged earlier about how lactate clearance is critical for race performance— and how different workouts work in this area in slightly different ways.  Physiologically, there is a big increase in the protein monocarboxylate transporter 1 (MCT-1) on cell walls and mitochondria that enables cells to suck lactate out of the blood stream and use it more effectively as fuel.  Remember, lactic acid isn’t bad and doesn’t cause pain– it’s a critical fuel that your muscles (and particularly your heart) use a lot of.  A few years ago, Matt Fitzgerald wrote a great article about why lactic acid is getting a bad rap.  It’s all the nasty stuff (notably H+ ions or protons) that cause the problems.  When cells have plenty of MCT-1, they gobble up both lactic acid and H+ ions out of your bloodstream, so you go faster (lactic acid being metabolized into glucose) and feel better (because of fewer H+ ions).

It could be that the speed work I’ve been doing over the last few days has helped.   But all this takes weeks and weeks to fully develop, right?  After all, most of the studies have shown a dramatic increase in MCT-1 after eight weeks.  Well, it turns out that all this happens a little faster than I originally imagined.  In fact, in lab studies with rats, researchers have shown that genes producing MCT-1 “up-regulate” the production of MCT-1 very quickly– within 24 hours!

My Take on All of This

It’s pretty well-understood that mitochondrial function and MCT-1 concentrations drop as we get older.  Perhaps this– together with how easy MCT-1 is to train–  explains why older runners respond so well to sprint training.  But it’s not just any sprint training.  Here’s my thoughts on this– and how it affects training.